School of the Future, or Information Technologies in Education The Smart Internet Foundation presented educational projects in the .ДЕТИ domain at an international conference in Troitsk

On June 26, Troitsk (a municipality added to Moscow as part of the 2012 city expansion plan) hosted the 29th international conference, Modern Information Technologies in Education. It traditionally brings together professionals whose activities are in one way or another related to education: school and preschool teachers, university faculty, methodologists, and representatives of companies involved in the development of education.

As a partner of the event, the Smart Internet Foundation held a presentation of its domain, .ДЕТИ, including its functions, capabilities, the system for monitoring malicious activity on children’s and teenage websites, and its educational projects for new users of the internet in the .ДЕТИ zone. The participants who showed special interest in the project were awarded certificates for free registration of .ДЕТИ domain names, for a period of 1 year. The placement of resources in this zone is incredibly relevant in modern realities, when children spend up to 8 hours a day on the web, often without adult supervision.

At the opening of the conference, head of the Troitsk administration Vladimir Dudochkin thanked the organizers and said that he hoped that the participants would have an interesting time.

This year, the main topic of the conference was digital school and the prospects for development of high-tech education in Russia. The event included a presentation of the Moscow Electronic School (MES) project, launched with the support of the Moscow City Government in September 2017; at present more than 150 schools have joined. The goal of the project is automation of educational processes, simplification of teachers and children’s access to educational material and the introduction of innovative teaching methods. Why is all this necessary? The reason is simple: modern schoolchildren, representatives of Generation Z, have been born into a new information society, which means they need to be taught in a new kind of way. Old approaches are no longer effective. During the plenary session, the participants criticized the class-lesson system used for over 350 years. According to Director of the Blended Learning Center of the Moscow State University of Psychology & Education (MSUPE) Natalia Andreyeva, the idea is to create an “individual educational trajectory for each student,” which is difficult to implement within the old system. The term blended learning implies a program combining teacher-led sessions, self-study and online learning. There are about 40 blended learning models, the most common of them the Flipped Classroom, Station Rotation and the Flex Model.

One of the persisting problems is a serious gap between the level of high-school training and college requirements, and employers’ requirements later. In conventional schools, students are pointed towards individual progress, whereas later they need the ability to work in a team and make collective decisions.

In other words, the digitalization of education is a trend conditioned by reality. According to experts, the development of this trend is hampered by the following factors: lack of teacher competence in information and communication technology, poor equipment of educational institutions, and lack of quality digital educational services. One of the sections of the conference was entirely devoted to teachers’ IT skills, where participants tried to figure out how and what to teach those who teach others.

Another relevant topic raised by lecturers at various sections is children with disabilities. A generally accepted view is that electronic devices are harmful to children in general, especially for children with health limitations, but many reports have suggested that this opinion is erroneous.

However, recently there has been a positive trend: parents’ attitude toward digitalization is no longer entirely negative. According to statistics provided by the Prosveshcheniye publishers, more than half of parents believe that a computer or a tablet can help their child learn, and 43% of respondents are sure that it is much more interesting to study with an electronic textbook. Speaking about technology, we cannot ignore security matters. Director of the Coordination Center for TLD .RU/.РФ Andrei Vorobyov told the audience about several social and educational projects designed to ensure safe web surfing for children. One such project is “Learn the Internet, Manage It!” co-sponsored by Rostelecom and aimed at the development of digital literacy for novice Runet users, learning the correct and most importantly, safe online behavior. The project portal teaches children in interactive format how the internet works, its history, security and protection of personal data. The new skills can then be practiced in a mobile app, and used in the annual nationwide online championship in November.

The exhibition organized in parallel with the educational part of the conference had a competition of the best digital projects for children and young people, Positive Content, and a contest for new online journalists, DOT journalism: Young reporter, co-organized by the Smart Internet Foundation. At other display stands, visitors could learn how to control a robot, go on a trip using virtual reality glasses, purchase IT textbooks, and got a chance to create games, and get a free manual on psychology of security and personal data management on the web developed at the Coordination Center in partnership with the Federal Institute of Educational Development and Foundation for Internet Development. 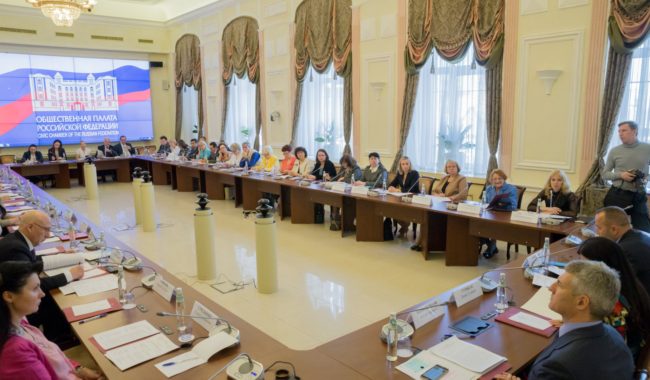 January 9, 2019
Previous Post The Risks of children’s internet addiction
Next Post Electronic Week held in the Altai with .ДЕТИ domain