What is it – being a volunteer? Firstly, it is a great honor given to you. Secondly, it is a  grave responsibility. And finally – excellent opportunity to practice your skills (whatever they are) and at the same time help people in despair or preserve the environment.

But enough these sentimental talks!

More important for every volunteer or a person eager for being a volunteer is something else. This person should know a legal code about volunteering in native land or in any other country which is initiating the volunteer movement.

In this article we are going to examine Volunteer Acts in Russia and several developed states and decide whether this acts are necessary.

In Russian Federation the federal law  regulating all actions of charitable institutions was adopted on the 11th of August, 1995. This law marked  targets of charity and volunteering. The most crucial are:

These statements describe all the spheres where the volunteer could be helful.

At the same time the actual state of affairs considering the volunteer movement in Russia is not as clear as it is in the above-mentioned law.

In January, 2013 the Council of the Federation published a bill about volunteers. This bill was widely scrutinized by several NCOs and volunteer organizations. The reason for the sharp criticism is hidden in several statements of this bill. For instance, a person which helps someone gratis and a person which participates in any volunteer movement became the same notions. Moreover, if the citizen is not a member of any volunteer or charity organization, he is not allowed to offer help in state of emergency. And the actions made by ‘official’ volunteers will be under strict control. In  other words, the movement which embraced millions of people was stopped and ruthlessly ruined. Any amendments in this bill were not adopted so the question of the volunteer regulation in Russia is still open.

Public figures say that Russia should adopt international practice in regulating the volunteer movement. There is the Ministry of Justice in Slovakia which concentrates on charitable and volunteer organizations and cooperates with them actively. Other developed countries have the volunteer movements controlled by different departments. So it is not crucial to create a special government body to supervise activities of organizations.

Furthermore, a lot of developed countries do not have a law controlling activities of such institutions. Among this states there is the United Kingdom where the volunteer activity was the main force during the Olympic Games-2012.

It is worth to remember that no law will be able to control such a serious and giant movement while it doesn’t consider all the traits this movement has. Russia has a great potential to use volunteers in any type of situation – thanks for our mental predisposition to help someone in need. For now the government has to decide whether we need this law. Perhaps self-organization plus compassion plus action is the perfect formula for successful  volunteer activity in Russia. 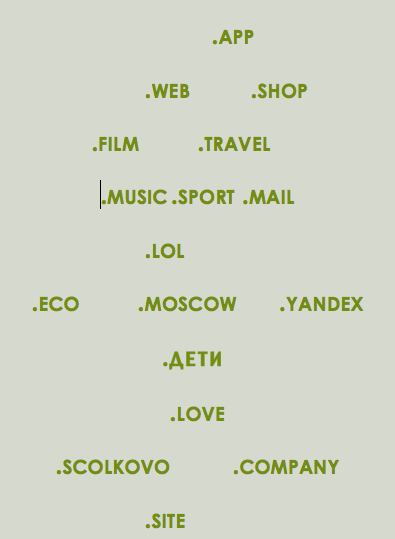 4 steps to prepare for the new gTLD expansion

Digital Notes: Plans for a New .Music Suffix, but Who Will Own It?